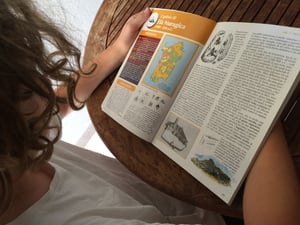 As Willy Brand correctly put it, “If I’m selling to you, I speak your language. If I’m buying, dann müssen Sie Deutsch sprechen!”.

An axiom, whose validity I experience time and again when I look for things online offered only by a website written in a language I do not understand. I leave empty-handed, reminiscent of a “linguistic trauma” suffered in my teens. During my first attempt to explore the world, I landed in a Greek supermarket, ravenous and thirsty. And what did I buy? Very little. Why? I could not understand the labels and felt terrible. You might say it is part of the experience. But I ended up in a restaurant, spending much more than I should have done, and experimenting first-hand the economic consequences of not speaking a language.  Since then, I became a linguist, translator and interpreter. And although conscious that the number of languages by far exceeds what a human being may ever master, I know for certain that knowing a few of them is very advantageous.

Being able to have a thorough comprehension of the language of the country we do business with as well as speak it, undoubtedly contributes to creating the basis for mutual understanding, improves communication and creates a degree of trust that fosters exchanges on a personal, social and economic level. Further, knowing a foreign language is the key to access the richness represented by the literature, the history, the art, the mores and the specific traditions of the “other” people we interact with, thus fostering deeper ties based on mutual respect.

If we agree that the world is becoming “smaller and smaller”, that more and more people travel, that the newer generations are born nomads and travellers and that economic exchanges are global, then why not make the uptake of foreign languages in schools a key strategic priority at par with STEM subjects?

True, English is the widest used language (but not the only one), and if you speak English, you can usually achieve a certain degree of interaction in almost all other countries. But does that offer an insight into the relevant culture? No, and in some cases, it hinders the true understanding necessary to reach a deep and genuine level of interaction and trust.

I recently read the Language Teaching in Primary and Secondary Schools in England 2018 Report by the British Council and was puzzled by its findings. Because the passion for a foreign language and the curiosity for other cultures usually starts early in life. And learning a language early in life is by far easier while young. Exposure to different cultural realities, travel and peer interaction do help, for sure, and there is a direct correlation between schools with an international pupil base and the uptake of foreign languages. But the number of students ending their secondary school with language knowledge is decreasing (only the uptake of Spanish is on the increase, while the uptake of German and French suffered a marked decrease).

According to the findings, only half the pupil population take a language to GCSE. Entries are higher in London and the South East (up to 62%) and lower in the north (Middlesborough 26%). 63% of candidates at A- level are female, 37% male. The time allocated to languages decreased (due to financial pressure, the focus is mainly on STEM subjects). Further, since the introduction of the new GCSE there seems to be a very marked trend towards high and middle ability pupils and away from lower ability pupils and those with special educational needs.

Some interviewees expressed the view that students at GCSE are put off by the level of difficulty and the amount of language they have to learn after the recent changes in the requirements and the grading structure, which makes getting good grades harder.

Financial pressures have obliged many schools to cut back on student exchanges, which offer the best exposure to a foreign language and culture. Overseas projects are considered too costly, especially in deprived areas, where parents cannot contribute much to them.

There seems to be a social and cultural divide, exacerbated by the Brexit vote, with repercussions on the perception of the value of a foreign language. The retreat from a European-oriented approach is often reflected in remarks like “what is the value of languages as we don’t’ need it”. Brexit mood also affected the availability and the recruiting of EU language teachers.

Further to the above, there seems to be a perception issue: for many, languages are not as important or useful if compared to other STEM subjects. According to some interviewees, “students who are our brightest linguists tend to take STEM subjects choosing further maths over a language”. Schools do not state clearly the importance of languages. And students and parents are not aware that, i.e., German is the most required language in recruitment in London and internationally in Europe.

Language learning seems to be valued more in schools where there is already a relatively high degree of multilingualism with a higher proportion of pupils with English as an Additional language and students are already culturally aware and internationalist in outlook.

Language awareness is very important. Only through a thorough exposure to a language, you can mature a position which makes you more receptive to diversity. An automatic translation is not enough to catch the nuances of a different culture.

Considering the imminent Brexit, the UK will have to invest more resources into language skills for needs previously covered by the EU institutions.

There is now a strong need, and a strong case can be made for a strategy that puts languages at the heart of the English/Scottish/Welsh/North Ireland school curriculum, fostering an open and respectful exchange with the other nations and cultures worldwide, because …

Fancy contributing to ILT's blog? Write to us